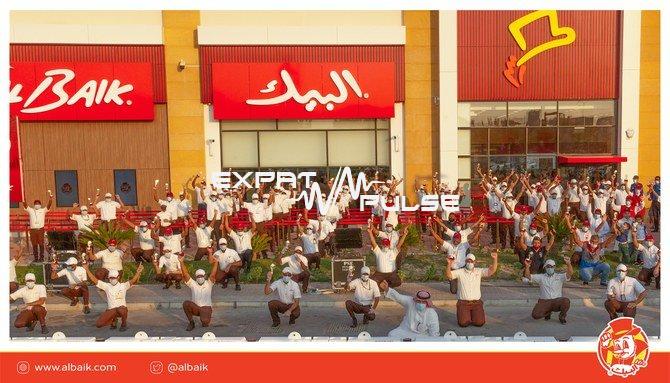 Albaik Goes Internationally: The west coast’s famous fried chicken has made its way to foreign shores, as one of Saudi Arabia’s most popular fast-food brands — Albaik — opens two new branches in the kingdom of Bahrain.

The company originally made the announcement in November of 2018 via Twitter. “In line with the Kingdom’s Vision 2030, which encouraged local businesses to expand internationally, Albaik was able to sign a lease for the first branch of the restaurant in the Kingdom of Bahrain,” the statement said.

The two new branches are located in Sultan Mall, and at the Bahrain International Airport. While the Sultan Mall branch is officially open for business, the chain announced on Twitter that the airport location would be open soon.

The restaurant chain was created in 1974 as the Kingdom’s answer to American brand Kentucky Fried Chicken. For the majority of those 46 years, Albaik operated purely on the west coast of Saudi Arabia, with locations in Jeddah, Makkah, and Al-Madinah.

Travelers to those cities would often stock up on tinfoil packets of fried chicken, the brand’s famous spicy nuggets, and piles of golden, crispy-fried shrimp before boarding their planes. It was not uncommon to see them transporting the food in carry-on luggage, or in tightly tied plastic bags, taking them back to other parts of the Kingdom, often to the chagrin of other passengers as the smell permeated the planes.

The exclusivity also created a new trend of hawkers in the capital who would carry out “chicken runs.” Opportunist buyers would often drive to a city with a branch of Albaik, stock up on produce and drive back to Riyadh with boxes to sell at exorbitant prices out of the backs of trucks on the side of the road.

However, both trends died out when Albaik began expanding outside the western region, with branches opening in Riyadh and Alkharj in 2018, a pop-up in Jubail during the March 2019 “Sharqiah Season,” and another branch in Dammam in August 2019.

Albaik, similarly to KFC, has a “secret blend” of herbs and spices they use to flavor their chicken, giving the products a unique taste that has yet to be successfully replicated — although it didn’t stop people from trying. Prior to the first branch opening in Riyadh, a number of copycat restaurants operated in the capital, sporting red-and-yellow signs with names like “Albaak” or “Albaiq.” Some even featured similar-looking chickens, and in one case, a duck wearing a top hat.

Albaik is also a popular draw for pilgrims to the holy cities, who often fondly associate the taste with their pilgrimages to Makkah and Al-Madinah.

Taking all the above into consideration, it’s no surprise that the Kingdom is one of the world’s largest consumers of poultry products. According to GlobeNewswire, the Saudi Arabian poultry market is expected to grow at a compound rate of 3.47 percent over the next five years.

More Than 700000 people apply for Covid vaccination in Saudi Arabia

No plan to review VAT Short or Medium Term: Finance…